In the run up to the January transfer window, West Brom were repeatedly linked with Rodrigo Battaglia.

The Argentine midfielder plays for Sporting but had been struggling to get regular games with the Lisbon club, leading some in Portugal to believe a winter transfer was a possibility.

As the window opened it was claimed West Brom had submitted a €15m offer for the player.

Sporting were looking at a figure closer to €25m and reports a €20m compromise figure could do the trick looked like the Portuguese club fishing for a better offer from the Baggies. 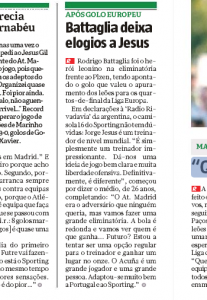 A deal didn’t go through and Battaglia became a Sporting hero this week when he scored a goal to help the club through to the next round of the Europa League.

Quizzed on his future after the match, Record quote the player as saying: “I’m trying to be a regular option for the coach and win a spot in the eleven…. I’ve adapted very well to Portugal and Sporting.”

Should Battaglia be getting regular games then it’s unlikely he’ll push for an exit, although Sporting may still be tempted by anything over €20m.

However, given West Brom’s current situation interest could be off. The club’s targets will be very different should they face relegation to the Championship in the summer.