Watford sealed a berth in the FA Cup final after they came from two goals down to overcome Wolverhampton Wanderers in the last four of the competition.

After opened the scoring for the Hornets, Gerard Deulofeu’s extra-time goal was the difference between the two sides.

In recent months, the forward has emerged as a transfer target for AC Milan and on March 7th, Sport reported his name has been ‘underlined in red’ by the Serie A outfit for the summer.

Marca have interviewed the former Everton man and state ‘it will rain offers in summer’ if he continues his current form.

In response, he said: “It is clear that whenever you receive offers or there are talks about interest of other clubs, it’s because you are doing well at your club.”

“I will continue like this and we’ll see what happens. At the moment I have to be focused here to finish well this season.”

On Watford’s current season, the Spaniard explained: “The truth is that everything is going very well, both the team and on a personal level. We are eighth in the Premier [League table], we have made it to the final of the FA Cup and aspire to Europe [next season].

“I’m very happy, but the important thing is to finish well. It is the key month. If we do not do it well, everything will go to hell. The goal is to win the FA Cup, it would be very important to win a title.”

In the summer of 2017, Deulofeu returned to Barcelona for his second spell, only to leave them a year later.

Marca asked ‘Have you thought about going back to Barcelona in the future?’

“Barcelona is a past stage. I already returned twice and could not be [successful] in either of them. It is a stage that I consider closed. I do not want to live more from the past. I have my present and a great future that is on the other side,” the player added. 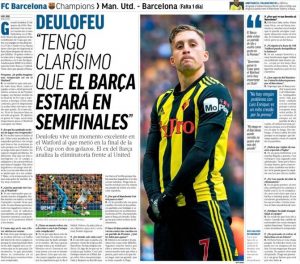 Since making his loan move to Vicarage Road permanent last summer, the Spaniard has scored seven goals and registered five assists in all competitions.