The Christopher Nkunku story is back for Arsenal, and there’s good news and bad news.

Let’s start with the good.

Le Parisien say Arsenal are ‘in the running’ to sign the player this summer, which is no surprise. The newspaper also state Rennes, who Nkunku has recently been linked with, deny any contact.

If that’s true it’s one less competitor, although there’s a chance Rennes could be going down the familiar route of not wanting to upset a prickly PSG.

The 21 year old himself is presented as counting on a transfer this summer, he feels that assurances over playing time haven’t been honoured and is therefore looking to leave.

PSG, and specifically their director of sport Antero Henrique, don’t want to lose a youth product for little money or on a potential future free transfer. Therefore, they’re still trying to extend, even if that simply means they’ll only get a higher transfer fee.

Le Parisien state: ‘And the longer the contract, the higher the compensation can be. Antero Henrique, the Portuguese sports director, took this mission to heart and the penalties inflicted on Adrien Rabiot go in this direction.’

The insinuation is Rabiot has been made an example of. Therefore, Nkunku either has to bring a big fee this summer despite his deal expiring in June 2020, renew and bring a big fee either now or in the future, or prepare for the Rabiot treatment.

Character assassination, ostracisation, and general harsh treatment from Henrique, who appears to be taking out his wider frustrations in that way. 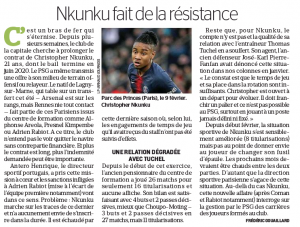 Unai Emery would surely be delighted if Arsenal can achieve this signing. He was the manager who really brought Nkunku through at PSG, and that will also benefit the Gunners when it comes to tempting the player.

First, those in charge of transfers at Arsenal, and perhaps also Nkunku’s representatives, need to get their heads together and work out how to keep a transfer relatively low-cost, but still convince Henrique he deserves a shiny medal for battling PSG’s corner well.