At times it was end-to-end like a basketball game, although without the conversion of promising moves into real chances.

Eden Hazard was very much the star of the show, clearly enjoying himself scoring both goals, the first being a prime example of the Belgian at his best.

Whilst it was great for Chelsea fans to see, there’s the looming feeling of what will happen next season should the transfer to Real Madrid finally happen.

Goals will be harder to come by, and the signing of Gonzalo Higuain hasn’t had the impact hoped for. It has pushed Olivier Giroud out a little. Last night was the Frenchman’s 24 appearance in the Premier League this season, but 17 of those have been as a substitute.

His contract expires in the summer, and Chelsea haven’t yet provided full clarity on what they intend to do with any further year option.

That means an exit is a possibility, and there have been reports of interest from various countries.

Tuesday’s edition of L’Equipe reports that Bordeaux have some interest. 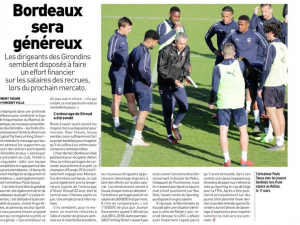 The Ligue 1 club have ‘take the temperature’ with Giroud’s entourage, and L’Equipe say that means they’ve asked for information.

Bordeaux want to invest, but would rather do so on wages than transfer fees, so the chance to sign Giroud for free would be tempting.

That all depends on Chelsea, and Bordeaux may be being overly optimistic.