On Thursday, we spent a lengthy amount of time trying to get our head around Inter’s FFP situation, and what they needed to do to raise the €30m required to avoid even more punishment.

That same night, news emerged from Italy the Serie A side had managed to secure enough sales in time, meaning they would be able to keep their big stars, like Ivan Perisic.

The Croatia international, as you very well know, has been a reported target for José Mourinho at Manchester United, and despite Inter’s demands of €50m, Ed Woodward is only reported to have offered somewhere between €30-40m depending on reports.

Over the past week, the message coming out from Italy has always been the same, which is ‘pay up by Friday or we take him off the market’. 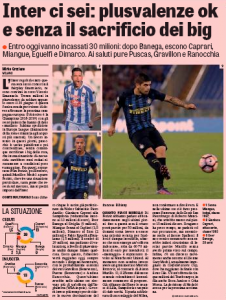 Well, today is Friday, and that still stands.

Seemingly true to their word, even with the €30m in the bank, Inter will still accept a €50m offer for Perisic if it lands on their desk today, but, if it doesn’t he goes off the market and, as we’ve explained 1745 times before (it feels that way, anyway), will be a part of Luciano Spalletti’s plans next year.

However, yesterday saw Gazzetta report that Inter would still sell if an offer that blew them away was made, and the Italian newspaper now appear to know how much that would be: €60-70m.

Seeing as a lot of Manchester United fans weren’t too keen on their club spending €50m on Perisic in the first place, we can’t see the prospect of their club adding an extra €10-20m on top of that going down all that well, to be honest.

Still, this looks like it could be the last Perisic update for a while.

It’s been a pleasure.