Thomas Tuchel is one of the managers most linked with taking over should Arsene Wenger decide to leave Arsenal this summer. Currently with Borussia Dortmund, Tuchel doesn’t have a a great deal of top level experience behind him but it’s his approach to the game and image as Jurgen Klopp 2.0 which encourages the claims.

After a good period with Mainz, Tuchel took over Borussia Dortmund from Klopp in 2015, and in his first season took them to second in the Bundesliga. This season RB Leipzig have come between leaders Bayern Munich and Dortmund, with Hoffenheim currently just a point behind Tuchel’s side.

Whilst there’s still uncertainty over Wenger’s future, Tuchel will likely continue to be linked to Arsenal, and SportBild have asked BVB boss Hans-Joachim Watzke if he’d release him for the job: “Keeping a trainer against his convictions makes no sense at all. But I’m not a friend of dealing with 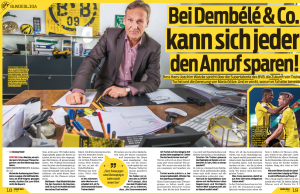 That’s pretty clear from Watzke, however reluctant he may be to address rumours: If Arsenal want Thomas Tuchel and he wants them, Borussia Dortmund won’t stand in his way.