Home Europe “That would be something special” – 14 goal star questioned on Liverpool...
SHARE

If a young player does well in the Bundesliga then it’s become automatic for that player to be linked with Liverpool. Having Jurgen Klopp as manager has made all the difference, the German coach’s good record of working with talent only encourages rumours.

That’s not to say it’s always overblown, Klopp has already shown that he’ll look towards the Bundesliga for Liverpool signings and it would be no surprise if he buys from Germany again this summer.

One of those linked recently has been Timo Werner, Red Bull Leipzig’s young attacking sensation. With 14 goals and 4 assists so far this season, Werner has found his way into the senior Germany national set-up.

Being the man of the moment, German magazine SportBild interviewed Werner, and inevitably asked about the Liverpool rumours.

The 21 old sounds interested in the prospect, even if he doesn’t want to move right now: “If you could play at Anfield Road and hear the fans sing “You’ll Never Walk Alone”, that 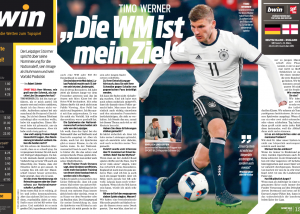 would be something special. England is different and I am a young player. I just feel good at RB, and Leipzig can still grow. If I can be part of it, I’ll be very happy.”

It’s probably best to leave Werner where he is right now and not disrupt his development, but if Bayern Munich don’t come swooping in then a future move to England seems plausible.