Depending on who the source is, Napoli’s Faouzi Ghoulam is signing for a different club every time.

The Algerian media believe a move to Real Madrid is favoured, with Zinedine Zidane a fan of the left-back, while Il Mattino believed most recently that Manchester United and Manchester City were battling it out.

Gazzetta dello Sport on Wednesday, however, seem to think there is only one Premier League club after the defender, and that is Antonio Conte’s Chelsea. 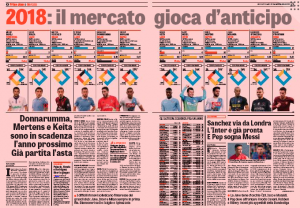 With the Italian manager favouring a 3-4-2-1 formation at Stamford Bridge, signing someone with Ghoulam’s attacking mentality and stamina certainly would help Marcos Alonso get some rest, considering the Spaniard has played in all but six of Chelsea’s games since arriving at the club.

With a valuation of €12m and a contract running out in the summer of 2018, the Blues could pull off a rather nice coup by signing the Algeria international at the end of the season, but Gazzetta still believe a stay at Napoli is a 30% possibility.

Chelsea are also given a 30% chance of pulling off the deal, while Paris Saint-Germain, looking to eventually replace Maxwell, are given the exact same odds by the Italian newspaper.

As for the remaining 10%, that’s reserved for ‘other clubs’.

A Conte/whoever manages the Ligue 1 champions battle for Ghoulam in the summer? Depends on who that is, it could be an interesting saga to watch.