Currently at Bologna after a season on loan with Crotone, Lorenzo Crisetig is attracting interest from the Premier League.

There was a brief link with Watford a couple of weeks ago, started by the English press, but that died down rather quickly, leading us to believe it was just a passing interest as Marco Silva looks around the European transfer market to bolster his squad ahead of his first season in charge at Vicarage Road.

However, that interest appears to have reemerged, as Gazzetta dello Sport on Friday mention the Hornets as one of the two clubs interested in the Bologna midfielder, the other being Las Palmas in La Liga. 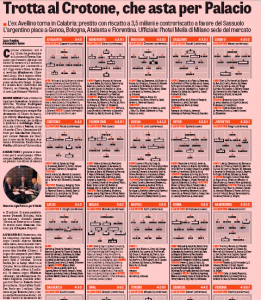 With Valon Behrami looking for a way out at Watford, bringing in someone like Crisetig, who would be anything but expensive for a Premier League side, could be an astute move by their Portuguese manager.

The 24-year-old made 32 appearances on loan at Crotone, picking just one assist from his defensive midfield role, and played an integral role as the Serie A side dramatically escaped relegation on the final day of the season with a 3-1 win over Lazio.