Basically being told to ‘piss off’ by Antonio Conte, Diego Costa is on his way out of Stamford Bridge, and the signature of Alvaro Morata is doing little to dispel that idea.

Wanting a return to Atlético Madrid above all, the Spain international is currently in limbo as the Blues’ reported demands of £44m are a bit more than the La Liga side are looking to spend.

There is one club, however, whose new financial power has been very obvious on the transfer market, and that is AC Milan in Serie A.

The Italian side have already spent over £150m this summer, and aren’t planning on stopping there, hoping to bring in another striker to play alongside/rotate with André Silva.

Top of the list appears to be Nikola Kalinic, Fiorentina’s Croatian goalscorer, yet that very easily could have been Diego Costa as Gazzetta dello Sport reveal on Friday.

The daily sports newspaper claim that the Chelsea 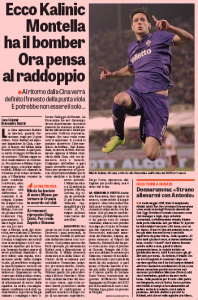 forward’s agent has been offering his client to AC Milan over the past few months in hope they will decide to save him from his Stamford Bridge ordeal, but the Serie A side don’t appear to be interested.

Even if they did say no, you can’t blame Costa’s agent for giving it a go.

After all, anywhere other than Chelsea would be a good move for the 28-year-old right now.