Over the past 24 hours or so, we’ve covered the various reports surrounding Alvaro Morata’s potential return to Juventus.

The Chelsea striker has been touted as a potential summer target for the Serie A leaders, who see him as Mario Mandzukic’s heir in the current team, and multiple outlets have weighed in, including Mundo Deportivo in Spain.

The Catalan newspaper throw Paul Dybala into the mix, claiming he’d be open to the Spaniard’s arrival, but the problem is there are a lot of obstacles standing in the way.

We’ve also already covered the angle that Marina Granovskaia, regardless of what Antonio Conte thinks, sees the former Real Madrid striker as the man to lead Chelsea’s front line, and now Corriere dello Sport state Roman Abramovich has also had his say, and his sentiment echoes that of his director. 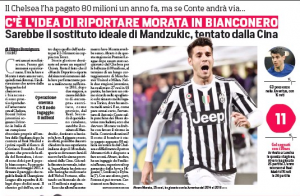 Furthermore, the Italian newspaper explain pulling this transfer off would involve a great financial effort from Juventus, as they would have to help the Blues recoup a vast chunk, if not all, of the money they initially paid Real Madrid, as well as pay him similar wages to what he currently earns at Stamford Bridge.

And that’s the biggest problem of them all, as doing so would make Morata the best paid player at the club, as his €8m/year surpass the €7.5m/year and €7m/year Gonzalo Higuain and Paulo Dybala respectively earn.

It seems highly unlikely, but, then again, so did Juventus spending €90m on the aforementioned Argentinian striker when he was at Napoli.