The Spanish media weren’t going to let recent Alvaro Morata to Juventus claims slide by without jumping all over them.

Tuesday’s edition of Mundo Deportivo has a big story on the claims, but doesn’t credit any of the reports coming from Italy, presenting it all as their own work.

It’s claimed Chelsea aren’t so keen on letting Morata leave this summer, something which had been reported in Italy already.

Paulo Dybala is brought into proceedings (no, not as a swap, don’t get excited) and it’s claimed the Argentine ‘fervently supports’ the idea of Juventus signing Morata this summer.

Mundo Deportivo then go on to say Dybala has told Juventus several players he wants signing this summer, but the claims are very similar to some made by Don Balon yesterday, so deserve extra doubt. 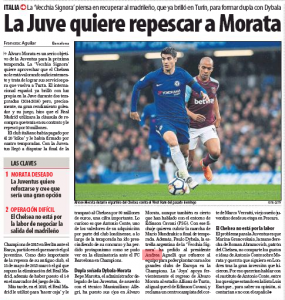 Unfortunately for Juventus, Chelsea hold all the power here, and it’s claimed Marina Granovskaia has decided that, whatever Antonio Conte thinks, Morata is right for a role at Stamford Bridge.

Conte’s replacement will have a say, but the idea is to stick with Morata.

The European media always love finding a way to put Granovskaia in any Chelsea story possible.