Starting eight of the last 13 games for AS Roma in the final stretch of the season, Nicola Zalewski showed exactly why José Mourinho believes in him.

The 20-year-old, born in Italy but who already boasts five Poland caps, has caught the eye with his performances, which is why both Fulham and Leicester City came knocking for him recently.

That’s according to Corriere dello Sport, who claim the Cottagers and the Foxes are but two of many clubs to have taken an interest in the wing-back, capable of playing on either side of a back three.

The newspaper state that ‘in the past few days, various offers have arrived’ for the Poland international from the likes of Borussia Dortmund, Monaco and the two Premier League clubs, Fulham and Leicester. 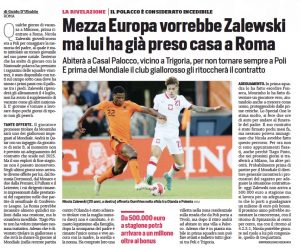 The latter were said to have noticed him during the Conference League semi-finals, where Zalewski even picked up an assist in the first leg.

Still, while AS Roma ‘could cash in €15m from his sale, they consider him unsellable’, meaning that neither Leicester nor Fulham stand a chance at this moment in time.