Valencia will be without the services of Cristiano Piccini for the next five months after the Italian suffered a patellar fracture in training.

With less than four days left in the window, the Spanish club are looking to bring in a new right-back. Napoli’s Elseid Hysaj is their main target and Los Ches’ idea is to sign him on a dry loan deal, but the Serie A side reportedly want to include a mandatory purchase option.

Friday’s edition of AS claims the situation has forced Valencia to look at other options and once of them is Newcastle United’s Javier Manquillo.

Another Spanish outlet, Levante-EVM, also explained the Magpies fullback has emerged as an alternative to Hysaj. They hail the 25-year-old as a ‘very powerful, physical right-back’. 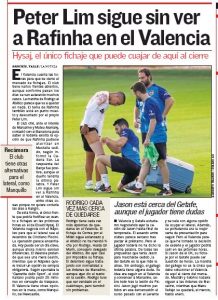 Both AS and Levante-EVM are only stating Manquillo is considered as an option, but neither report specifically makes clear whether Valencia would make an approach for him.

It looks like Valencia’s idea is to bring in a new right-back on a dry loan deal.