On May 17th, Sport explained that Barcelona are unwilling to table an improved offer to convince Matthijs de Ligt to join them in the summer.

It was also explained the La Liga winners have got tough and have a take it or leave it stance.

The decision now lies in the hands of the Ajax captain and his agent Mino Raiola.

Saturday’s edition of AS has a story on the centre-back and the headline reads ‘De Ligt wants to play at Barça; Raiola does not see it clearly’.

The Spanish newspaper explains the Netherlands international’s desire is to play for the Blaugrana and they have a ‘agreement in principle’ with the 19-year-old. 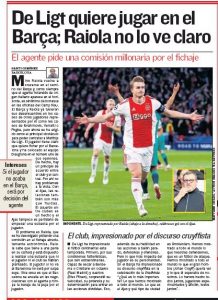 In addition to this, there is no problem between the two clubs to agree a fee for the transfer and the Dutch champions are also not in favour of starting an auction for the defender.

The report claims the ‘problem’ is Raiola who is asking for an astronomical commission in order to help them sign his client.

Should De Ligt fail to arrive at the Camp Nou, AS believe it would not be the player’s fault, but that of his representative.

AS doesn’t reveal the figure Raiola is demanding, but  Mundo Deportivo journalist Miguel Rico not only echoes what’s been reported by the former, but also provides additional details.

The Catalan newspaper explains Raiola wants €8-10m to bring De Ligt to the Camp Nou, which is higher than what Barca were initially planning to offer.

It’s claimed that Paris Saint-Germain, Juventus and Bayern Munich are willing to pay it. 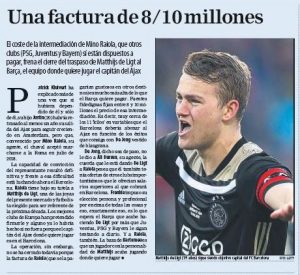 Both AS and Mundo are stating that even though De Ligt’s desire is to play for Barcelona, Raiola is the ‘problem’ for them to complete the transfer.