The winger has been in fine form for the Jupiler Pro League side in the 2018/19 season, scoring 22 goals and registering 11 assists across all competitions.

On April 19th, the Belgian’s representative Josy Comhair admitted the Gunners “could sign” his client, while he also confirmed that Wolfsburg are interested in the 24-year-old.

Earlier this month, the agent once again stressed that joining Unai Emery’s side is one of the options for the winger.

Saturday’s edition of Belgian newspaper Het Belang van Limburg takes a look at those players who could leave Genk in the summer and Trossard gets a mention.

It’s once again claimed the Europa League finalist and the Bundesliga club are the two ‘main candidates’ to sign the player and his employers are waiting to receive a top bid from potential suitors. 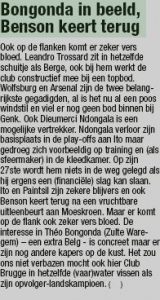 So far, it has been quiet as Genk have not received any offer.

Trossard and Genk will be hoping the situation changes quickly as his agent has been constantly talking about interest from Arsenal and Wolfsburg.

On Friday, Trossard admitted Sunday’s clash against Standard Liège ‘might be my last one in a Genk shirt’.