On May 16th, we carried a report from Mundo Deportivo, who explained that Barcelona are in ‘pole’ position to sign Ajax captain Matthijs de Ligt, but there’s ‘still no agreement’ to complete the transfer.

Earlier this month, Sport reported the La Liga winners’ efforts to sign the 19-year-old are getting complicated and today’s edition of the same newspaper now explains the reasons.

At the club, the optimism to seal the deal for the Dutchman has dropped a little, after several meetings with him and Mino Raiola.

It’s claimed Ernesto Valverde’s side made an offer for the centre-back a few weeks ago, but his agent Mino Raiola expects an improved deal for his client, especially after raising his profile in recent months.

Sport states: ‘Barça insists on closing his signing in the same parameters of those that made the De Jong operation concrete.’

The defender was hoping there will be one more offer from Barcelona as he already has better deals on the table. The report now claims an improved deal from the Camp Nou will not come and he must take a decision on his future.

In spite of the current situation, the Netherlands international has always prioritised playing for the Catalan club.

Even though De Ligt is a priority signing for Barcelona, Sport explains there is a limit for everything and they will not allow the player and his camp to force the issue. 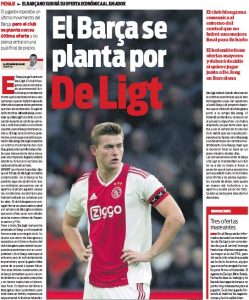 If De Ligt wants to follow his compatriot De Jong to the Camp Nou, he must be ready to accept their proposal over better offers he’s received from elsewhere.

Sport end their report by claiming everything is in the hands of De Ligt and Raiola, and at Barcelona they believe the final decision will be made in the next 10 days.