As Chelsea continue being named as one of the potential destinations for FC Porto star Luis Diaz, the Portuguese media brings interesting updates on the chase for the winger.

Besides being the Copa America’s top scorer in the summer, the Colombian forward already has 11 goals for his club this season, and it’s inevitable that the possibility of a big transfer starts being discussed by the Dragons.

One of the stories to have been published this week comes from A Bola. The newspaper expects Diaz to leave Porto in a record move, especially because of his €80m release clause. For Porto, a record move would be more than the €50m Real Madrid paid for Eder Militato.

Speaking of possible buyers, Chelsea are named among the likes of Everton, Liverpool, Newcastle United, Tottenham Hotspur, Milan and Real Madrid, as many other clubs already gave up the chase because of the big price. 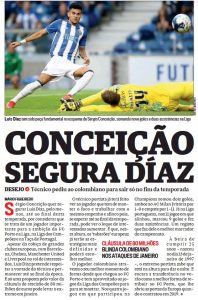 Now it turns out that Chelsea are linked in another story about Diaz, this time in a piece brought by newspaper Correio da Manhã.

The outlet features an article claiming Porto manager Sérgio Conceição has asked the player to only leave at the end of the season. That means the Dragons will only let him go in January in case the release clause is triggered.

The Blues are once again named as one of the clubs who are interested in the signing. However, it’s said Diaz will agree to Conceição’s request, so a potential move to the Stamford Bridge would have to wait until the summer.