Home Europe “He tries to improve me” – Defender explains benefits of having Man...
SHARE

Manchester United fans might not be on the best of terms with Chris Smalling, regardless of how well he’s doing at AS Roma, but Gianluca Mancini is.

The young Italian defender has spent most of the season playing alongside the England international, and the pair have formed a good understanding, with the 30-year-old proving to be a great partner on and off the field for his 23-year-old counterpart.

Speaking to Sky Italia, relayed by Gazzetta dello Sport, Mancini explained: “The season has been positive. In the second half, I made some mistakes, but it’s a growth process and I will try not to do them again.

“Having Smalling close by also helps. He gives advice on the pitch and tries to improve me. I follow him because he has experience and I have to steal from him.”

We’re guessing he doesn’t mean that literally, and the Manchester United defender’s possessions are safe, but it’s good to hear that Smalling’s loan spell away from Old Trafford hasn’t just been beneficial for him. 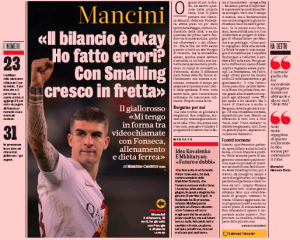 He left to get guaranteed first-team football elsewhere ahead of the 2020 Euros, which he got, but with the competition now pushed back to next year, the defender will have to think carefully about what he does next.

A lot will depend on what Ole Gunnar Solskjaer has planned for him if/when he comes back, but the latest from Italy was that Roma wanted to try and renew the loan, as they can’t afford what United are asking for (around €20m).