Much of the chat was about the goalkeeper’s personal situation, and how Euro 2020 being delayed could impact his prospects of featuring for the Netherlands in the near future.

Krul made sure to show his gratitude to health workers, who are on the frontline during the current crisis, and in a separate part, the footballer explained how Norwich have been doing their part in the community to make sure those in need know there is help available should they need it.

Like several Premier League clubs, Norwich have been getting their players to telephone supporters to bring some cheer, and to find out if further assistance is needed.

Krul explained: “That is why all the players of the club received a list with the telephone numbers of dozens of elderly people. We call them every week and if there is a mental or 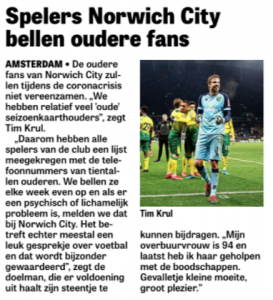 physical problem, we report it to Norwich City. However, it usually concerns a nice conversation about football and that is very much appreciated.”

The goalkeeper, like people up and down the country, has also been doing his bit to help those around him, which has involved picking up groceries for an elderly neighbour: “My neighbour is 94 and I recently helped her with the shopping. Little effort, great pleasure.”

With no return to football likely in the coming weeks, Krul will have time to help that neighbour a little more, and the big Dutchman is acutely aware of what the important things are right now.

Tim Krul | “Who am I to complain when the whole world is on fire?

“Attention should be paid to the nursing staff who walk straight into the fire for fourteen consecutive hours to save human lives. I have unlimited admiration for that.”https://t.co/9jsJNTafwF #ncfc