In the summer transfer window, Ernesto Valverde wanted Barcelona to sign Willian from Chelsea, but the deal didn’t take shape because the two clubs failed to reach an agreement over the transfer fee.

The La Liga winners went ahead and signed Malcom from Bordeaux and he’s struggled to get minutes with his new club as the former Athletic Club Bilbao manager was not in favour of his signing.

According to La Sexta, as relayed by Mundo Deportivo, the Catalan club are once again back in the race for the Blues winger and his arrival at Camp Nou may be ‘imminent’.

It’s claimed the agents of the Brazil international have already met the leaders of the Spanish champions to discuss the transfer and the west London club could set a price between €50-€80m.

Earlier in the summer, Chelsea demanded €70m from Barcelona for the 30-year-old and the latter could make an attempt to reduce the price tag by including Malcom as a part of the deal.

Having paid €41m to Bordeaux before the start of the season, the Blaugrana are ready to include him and pay additional €20m to bring Willian to Barca. 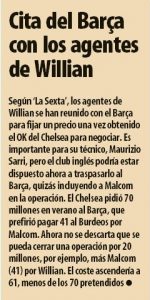 It’s only one source talking about this deal and we will keep an eye to see if there are more reports talking about a potential swap deal that includes Willian and Malcom.