Moussa Dembele took his Fulham form to Celtic and scored 17 goals and registered eights assists in his debut season in the Scottish Premiership.

Even before the forward joined Brendan Rodgers’ side in 2016, he was attracting interest from England as Chelsea were keen on securing his services.

A weekend edition of French newspaper L’Equipe reports that Brighton & Hove Albion made an approach for the 22-year-old after he completed one season with the Hoops.

It is also claimed that the Bhoys ‘only accepted’ the offer from Seagulls, but the deal did not take shape, even though the attacker was open to the idea of a transfer in 2017 in order to push his development faster.

Dembele decided to continue at Celtic for one more season and that’s exactly what happened as he left the Celtic Park and made a switch to Lyon. 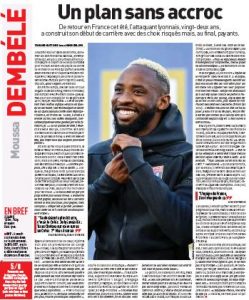 L’Equipe claims it looks like a ‘good pick’ from him to pick the Ligue 1 side, a year after he turned down Brigthon.