After avoiding relegation in their debut season in the Premier League, Huddersfield Town have been disappointing so far in the 10 matches played in the league this campaign.

The Terriers have failed to win any of their fixtures in the Premier League, while they have settled for a point in three occasions as they sit at the bottom of the table.

Jonas Lossl has started in eight of those matches and has failed to keep a clean this season.

Despite the poor results this campaign, the Danish goalkeeper claims he and his club teammates have stepped up and were positive of getting their first win of the league against Watford.

However, Huddersfield suffered a 3-0 defeat at the hands of the Hornets and Lossl explained how their latest defeat has had an impact on his side.

Speaking to Danish newspaper Tipsbladet, he said: “Yes it’s true. I was positive before this season. Now I have to take back on the first few matches, because I was in a different position.

“The atmosphere has generally been really nice and really good, but of course it was a big blow to Watford because we all had reached a place where we had stepped up so much  that we thought very much that we could go down and deliver a very good performance and a result in Watford.

“So it was a bit of an anti-climax to deliver the worst performance of the season, after we’ve been in a moment when we’ve actually delivered a good deal, but just did not get any points into the account.” 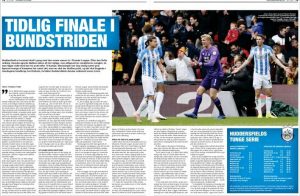 David Wagner’s side have the worst goal scoring record in the league as they’ve found the back of the net on four occasions, while they’ve conceded 21 goals and need to fix it in order to avoid relegation this term.