Most Tottenham supporters will be well aware of Toby Alderweireld’s longing to one day return to Belgium and live a normal family life.

The defender has spoken on repeated occasions about feeling homesick, and whilst he’s made it clear he’s aware he’s fortunate to be in the position he is, Alderweireld isn’t afraid to talk about the downside of being a professional footballer at the top level.

Missing out on family occasions has hurt, especially now he has two children, and when the time comes to hang up his boots, it doesn’t seem like Alderweireld will have the emptiness some footballers feel.

In an interview for Saturday’s edition of HLN, he goes over all of that once again, and when it came to talking about Tottenham, the 30 year old was asked about referring to Spurs as part of his family.

“I don’t want to present myself as someone who is perfect,” explained Alderweireld.

“I always try to be as loyal as possible. I have always done the right things by the club, I think. Whilst I have had other thoughts, feelings of anger. But then I try to show respect and keep doing my best. In whatever situation. My parents give me that.” 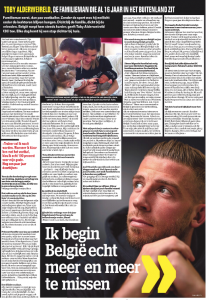 He was then asked that if Tottenham are a family, which family member is Jose Mourinho: “The funny yet strict uncle, don’t disappoint him.”

When it comes to his life after football, it’s no surprise the Belgium international has no plans to continue with a formal role in the game: “When I’m done with football, I’ll really choose my family 100%. I will never become a coach.”

That includes even coaching a youth team, with Alderweireld concerned that ambition could then bite and he’d end up spending more time away from his loved ones.