Borja Baston was expected to join a Spanish club during the winter market. There were several claims in Spain’s sport media of the player swapping Swansea City for a La Liga side, but it was hard to get a deal over the line.

The level of clubs which would have been interested in the 27 year old would have found it hard to match his Swansea wages, and that’s partly why his previous two moves, to Malaga and Alaves, had been on loan from the Birmingham club.

At the end of the January window, Swansea City agreed to cancel the player’s contract so he could join Aston Villa. Now he faces a battle to help them avoid relegation back to the Championship, and speaking to Marca for their Saturday edition, Baston was asked why he made this transfer choice.

“I had several offers,” he explained. “But Aston Villa is a historic club of the Premier League. In addition, Reina and Jota are helping me a lot in adapting. I hope I can play and score. It would be great.”

Baston is referring to playing in the EFL Cup final this weekend against Manchester City, although he’s clear things won’t be easy: “It is a very beautiful opportunity. It is difficult to measure City, we all know how they play, but the pressure they have, and 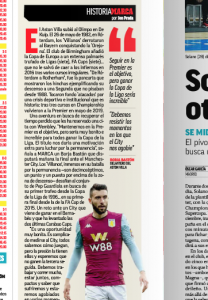 hopefully they won’t win the third straight one. We must work and run a lot, be together, compact and know that we will suffer and be burdened at various times. We must resist, take advantage of our options and have a bit of luck, which is always necessary in these games.”

Ready for his suffering, Baston is aware that compared to staying in the Premier League, cup success is secondary: “Staying in the Premier is the goal, but it would be very nice and incredible for everyone to win the League Cup. The title would give us an extra motivation to fight for permanence.”