Tottenham Hotspur’s pursuit for João Palhinha continues to be one of the main topics in Portugal’s sports media this week, following reports that the Premier League side have the midfielder as a priority this summer.

Earlier today, we already covered a piece from Record which said Spurs are preparing their first bid for the Sporting player, while the Lions are set to demand €40m for his move.

Now it turns out that newspaper A Bola also has an article on the situation, and they seem to have an idea of how much Tottenham are about to bid for the 26-year-old.

According to their information, Tottenham’s offer ‘could reach’ about €20m, plus another €5m depending on performance goals.

That should still not be enough to take the midfielder out of Alvalade, since he’s protected by a release clause of €60m and ‘not even half’ of that amount will convince Sporting of selling, meaning even €30m wouldn’t be accepted. 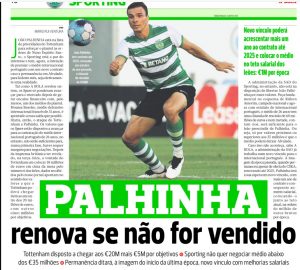 The Lions are in need of making outgoing transfers this summer, but in case Tottenham do not make a good offer for Palhinha, they’re preparing a brand new four-year contract for him.

They’re ready to reward his good form with a bigger salary, and there’s no reason to give Spurs a discount now.