Palhinha reports continue in the Portuguese media, and it’s again made clear that claims from England over a possible deal around €20m are wide of the mark, with Sporting, the Portuguese champions, looking for a lot more.

Thursday’s edition of Record reports Tottenham are ‘preparing a proposal’ for the midfielder. They say Spurs’ ‘first offer’ should arrive ‘in the coming days’, however, it’s expected to be far below what the Lisbon club want.

That’s because Record believe Tottenham are of the opinion €20m will do the trick, and Sporting want €40m to open negotiations over a summer move. Palhinha’s release clause is €60m, and until recently that’s what Sporting would have required.

Things have changed, because the club need to bring in some money, and other expected sales haven’t happened yet. That makes a Palhinha exit likelier than it would have been otherwise, and presents Tottenham with the opportunity for a reasonably priced deal. 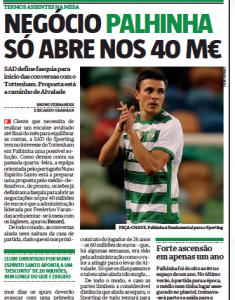 Record suggest that adding a pile of bonuses to a flat fee could work, although it’s worth remembering what happened with Bruno Fernandes.

Sporting president Frederico Varandas publicly revealed Tottenham had offered bonuses related to them winning the Premier League or Champions League, and he didn’t feel these were realistic.