Midfielder Gedson Fernandes will return to Benfica from Tottenham in January, with the Portuguese club keen to ensure his valuation doesn’t depreciate further.

The Portuguese midfielder joined Tottenham on loan in the last January transfer window, with Spurs including an option to buy in the deal.

However, he has managed just 13 appearances and 356 minutes of football since then and has made just one appearance this season, featuring for 63 minutes in the win over Chelsea in the Carabao Cup back in September.

He’s been linked with a return to Benfica for most of this month, with it reported on the 28th of December that the formalities were being agreed between both parties.

That’s now been sorted according to O Jogo, who say that Gedson is ‘preparing to return’ to Benfica, who want to ensure his value doesn’t drop further after his disastrous time in London.

Indeed, he could end up being a reinforcement for Jorge Jesus, who wants more players in that area of his team. 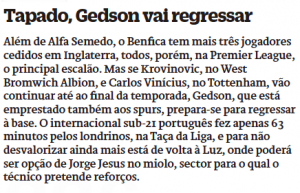 It’s not all bad news for Tottenham, though, as another Benfica player on loan at the club, Carlos Vinicius, will continue until the end of the season.

Unlike Fernandes, he’s featured regularly for Spurs this season, although five of his eight appearances have come in the Europa League.

Either way, it seems both parties are more than happy with the situation, and he’ll be staying for the foreseeable future.