Even though Tottenham and Benfica are still to confirm the end of Gedson Fernandes’ loan at Spurs, the Portuguese media continues to sound quite confident that the midfielder will be back in Lisbon next month.

This time it’s newspaper O Jogo who claims it, as they bring a page-long story regarding the Eagles’ options for that position.

The outlet writes that club president Luís Filipe Vieira is refusing to make big investments in midfield, first because Julian Weigl is doing well there in the past few games, and also due to the return of some loanees.

O Jogo claims that Gedson’s comeback is ‘being agreed with Tottenham’. While he should be back in January, Florentino Luís could also move back from Monaco at the end of the season. 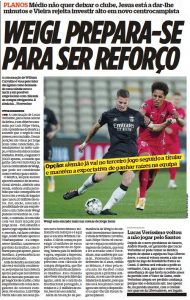 Both Benfica and Tottenham have been teasing with the end of Gedson’s loan spell for a while now, with José Mourinho recently confirming that he hasn’t been able to give the player any minutes.

Since joining Spurs on a one-year spell at the end of the season, Gedson only had one appearance in an EFL Cup match.