Tottenham being linked with Ricardo Pereira on Thursday made a great deal of sense.

The Portuguese media spent some time linking Tottenham to the fullback earlier in the window, and Kyle Walker’s exit looking increasingly close means Pereira is one of the obvious candidates out there.

One of the reasons Pereira has been an obvious candidate for Tottenham is his relatively low €25m release clause. With the player being on loan at Nice for the past two seasons, Porto haven’t had the chance to make his clause match his new status.

They’re keen to do so, but until then Tottenham and others have a chance to pay the clause and leave the decision up to Pereira himself.

€25m, good price, been progressing well, a great age for Tottenham, all in all a 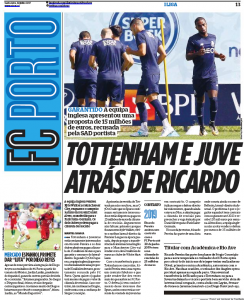 But O Jogo report that Tottenham have made a €15m formal offer, which has, unsurprisingly, been refused. Porto want the full €25m clause, and even then aren’t keen to sell the player at such a price.

Arsenal ‘do not lose sight’ of signing – Attractive loan deal...