We’ve reached that point of the transfer window, folks, the one where newspapers are now analysing the body language of a player during training.

Manchester United target Ivan Perisic is the subject of the in-depth scrutiny on Friday by both Gazzetta and Corriere dello Sport, who use very similar headlines, describing the Croatia international as ‘nervous’ as he waits for the Red Devils to up their offer to €55m.

The former of the two newspapers are the ones with the most ‘detail’, explaining the forward spent most of his day on his phone and ‘dodged’ almost everyone.

with a journalist who was recording him on his phone, Corriere seem to dramatise the whole thing, claiming the player tried to ‘snatch’ it from the Sky Italia reporter.

Yes, this is where we’re at with the Ivan Perisic to Manchester United story.

However, everything seemed to changed after lunch, with Gazzetta claiming the winger was ‘perhaps catechised’ during lunch, as he came out all smiles and was one of the most willing when it came to taking selfies with fans.

It’s all a bit ridiculous, but when there’s no movement, something needs to talked about. 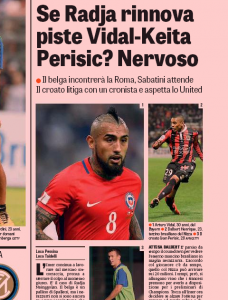 Corriere dello Sport even talk about the team photo (embedded below), where Perisic seemed to purposefully stand to one side, away from the group, which could be a sign ‘he doesn’t feel a part of Inter’s project anymore’.

We’ll see, but things are getting desperate.

Won’t Jose Mourinho and Ed Woodward think of Perisic’s wellbeing? PLEASE SOMEONE DO SOMETHING!

Let’s all pretend that Perisic didn’t do it on purpose pic.twitter.com/9qU4Ug0Osj