It’s fair to say Andrej Kramaric was a bit of a Leicester City flop, leaving the club on loan a year after joining. Expectations were high, given the hype around the player in Croatia, and his agents pushing to get him a move to Chelsea.

Moving to Leicester seemed, from the Croatian viewpoint, like Kramaric accepting second best until something better came along.

Unable to force his way into the team regularly enough, Kramaric was allowed to join Hoffenheim midway through Leicester’s Premier League winning season and then completed a permanent move the following summer. 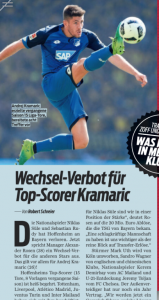 It’s a strange one, the player is certainly talented but has already failed to shine in England. He’s not exactly a prospect at 26 years of age, and Tottenham and Liverpool being interested would be incredibly fortunate for Kramaric.

Atletico Madrid, Juventus and Inter Milan are also credited with interest, perhaps his agents have been at work again.

Hoffenheim say they don’t want to sell, which surely won’t be a huge blow to Tottenham and Liverpool, regardless of what is being claimed in Germany.