It’s been a while since we covered anything about Chelsea’s Andreas Christensen, but it appears that interest in the Danish centre-back is once again emerging, this time from Italy.

The 21-year-old spent the last two seasons on loan at Borussia Mönchengladbach, where he really made a name for himself, to such an extent that the German side were ready to pay around €17m for him, which the Blues turned down.

Now back at Stamford Bridge, there are doubts over Antonio Conte’s plans for him in the long-term, as the seemingly impending arrival of Antonio Rüdiger and Kurt Zouma’s return from injury last season could both stand in his way for first-team football. 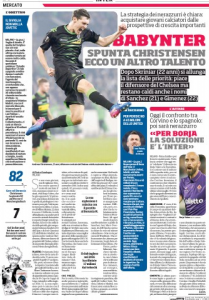 This is why Corriere dello Sport report on Wednesday that Inter have turned their attention to the Denmark international as they look to rejuvenate their defence following the signature of Milan Skriniar from Sampdoria.

Looking at Christensen’s past experience, and Chelsea’s reluctance to sell him for a reported €17m, the Italian newspaper come to the conclusion the young defender won’t be available for anything less than €30m.

Judging on the sales of past talented young talents who never broke through at Stamford Bridge, like Kevin de Bruyne, that fee sounds about right, perhaps even a little low.

Still, the interest is there, and if the alternatives like Davinson Sanchez at Ajax or José Gimenez at Atlético prove harder to get, they could very well turn to the Chelsea centre-back.