Now a long way away from the new manager bounce territory and losing players left right and centre, things are not going well at Tottenham.

José Mourinho is blaming everyone else, some of the fans are already losing patience with him, and the results are taking a predictable nosedive.

Tuesday night continued their downward trajectory as RB Leipzig secured a comfortable 3-0 win to knock Spurs out of the Champions League and add to their misery.

It was another poor performance from last season’s finalists, who didn’t have the skill or technical nous to match Julian Nagelsmann’s side.

As a result, the reviews from Germany do not make for happy viewing if you’re in any way associated with Tottenham.

First to Bild, who, as you may have expected, were pretty harsh with their player ratings following the defeat.

To explain, their ratings are very different to what we’re used to. While most are out of 10, or sometimes 5, they use the German school grading system.

A 6 is the lowest possible grade and, taking it back to the school grades; it means that not only were things not up to standard, but there was even a failure to understand the basics.

And it seems there was plenty of that as far as Tottenham were concerned. Dele Alli was the highest scorer with a three, meaning he just escaped with his dignity intact, while everyone else was awarded a four or a five.

The three worst were Serge Aurier, Toby Alderweireld and Eric Dier, who received fives, or deficient ratings from the German newspaper.

Mourinho doesn’t get off lightly either, receiving a four rating, with the newspaper saying he ‘lacked a victory plan’ for the game. 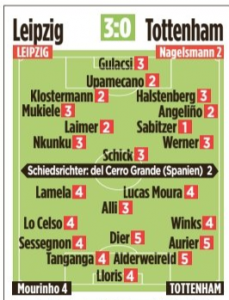 Der Spiegel are equally harsh, saying the injuries to Harry Kane and Son Heung-min ‘do not justify’ their performance in Leipzig before going in hard on Mourinho and his rapidly declining career.

They state that anyone who signed Mourinho in the past ‘knew what they were getting’; ‘a motivator’ who ‘played for titles with an effective defensive system’. That, though, has been missing since the end of his second spell at Chelsea.

Instead, Mourinho has ‘benefited above all from his reputation’, and at Manchester United, his ‘strengths seemed to have been lost.’ He’s yet to rediscover them at Tottenham clearly.

Eurosport focus more on Leipzig, saying they had Tottenham ‘under control’, which says it all about Spurs’ performance, while Welt say ‘Leipzig’s progress was never endangered.’

They were unimpressed by several of Tottenham’s players, saying Lucas Moura ‘fizzled out’, while the likes of Dele Alli, Erik Lamela and Giovani Lo Celso were ‘pale’. Mourinho meanwhile is described as picking an eleven that was ‘completely ineffective’.

All in all then, a dark, disappointing evening for Tottenham who not only unsuccessful in their attempts to progress but also wholly failed to earn a single piece of praise for their performance. They, and Mourinho, have a lot of work to do.