Catalan newspaper Mundo Deportivo today covers claims from England of Tottenham interest in Ivan Rakitic. They state that Spurs have actually been interested in the midfielder for a while, and his exit may be possible if Ronald Koeman wants to count on other options.

Tottenham ‘insist’ on the player and it’s Jose Mourinho leading interest from the Premier League club.

However, Rakitic has said on repeat occasions that he doesn’t want to leave Barcelona. There’s been frustration that they haven’t given him a new contract since 2017, and his current deal expires in June 2021, but from the player there’s been no agitating for a move.

Should the 32 year old ultimately agree to an exit, then it’s likely Tottenham could still find issues. Rakitic moved to Barcelona from Sevilla, and the Andalusia club is widely thought to be his preference for when he leaves the Camp Nou. 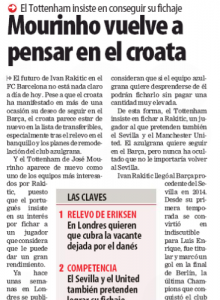 Rakitic’s family have business interests in the city, and would look well on a return.

Tottenham may have a chance if Sevilla aren’t as keen as their former player.