Valencia’s financial crisis presented an opportunity for clubs to arrive as vultures and swoop in on their best players.

That was expected and has already happened, but Leeds United being linked with Rodrigo Moreno still raised eyebrows.

Of interest to Barcelona and Atletico Madrid last summer, the Catalan club returned for the forward in January. Spanish newspaper AS state a €30m offer was rejected by Valencia owner Peter Lim during the winter market.

Now he’d probably have to take such a figure.

AS report Leeds United are currently preparing their ‘first offer’, and Valencia are ‘willing to listen’ to what the Premier League club will propose. 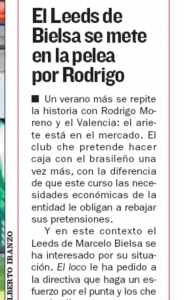 Marcelo Bielsa has asked his club to make an effort for the signing, and Leeds have therefore entered a ‘fight’ for him.

AS believe the first offer will be around €25m, and there’s no indication of whether that would be accepted or not.

Worryingly for Leeds United, Atletico Madrid are still said to be interested.