It’s been a while since Ricardo Pereira’s links with Tottenham Hotspur disappeared.

But now with the summer transfer window approaching, it seems this story could be back on.

On Tuesday, as newspaper A Bola analyses the situation of Porto’s right-backs, they claim that Pereira is one of the players who could be off at the end of the season.

When speaking of the clubs interested in him, they claim there are a couple of Ligue 1 sides, due to his good spell at Nice, and also Tottenham in the Premier League.

A Bola claims that the Spurs are ‘attentive’ to Pereira’s contract situation. 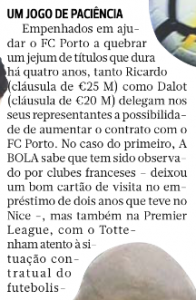 Actually there’s no big deal there. Pereira’s contract with Porto runs until 2019, and there’s a pretty attractive release clause, which is €25m.

Back in the last summer window, the Portuguese press claimed that the Spurs wanted Pereira to replace Kyle Walker at the club. This interest had convinced Porto to increase the player’s release clause, but so far, nothing was done on that matter.

In the summer Tottenham were said to have offered around the €12-15m mark for Pereira, but they then signed Serge Aurier from PSG.

Remaining interested could suggest Mauricio Pochettino isn’t thrilled with how that move has gone.