Home Premier League Tottenham defender gives hint on future, other club on his mind as...
SHARE

Whenever Jan Vertonghen or Toby Alderweireld speak to the Dutch media, there’s a pretty good chance a return to Ajax will come up in the questioning.

For the latter, a return is considered as something further away, given he’s 29 years of age, but with Vertonghen being 31 years of age now, and turning 33 before his Tottenham contract ends, it’s more realistic he could go straight back to the Amsterdam club.

About the situation, the defender told De Telegraaf: “We’ll see what the future brings, but Ajax is in my heart and in my mind. I am now a Spurs player, feel very good and cannot say much about the future.”

Vertonghen’s reiteration that his former club remains important to him, and especially that it’s brought up when talking about his future, will be welcomed by many in the Dutch media.

If when his contract ends there’s a chance of a free transfer to Ajax then it would be a fitting way to see out the end of his career.

The same newspaper did similar probing with Alderweireld last month, and he told them: “Never say never. At this moment in my career I don’t think about that yet. I think I can go on for years at this level. If I ever did, it is not to take it easy. 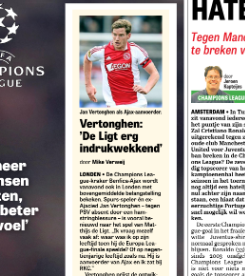 “I do not want to be 36 years old and can hardly walk. When I return, I certainly want to leave something. And not only in the dressing room. Of course it is close to home in Belgium and I have a bond with the club, because I played football at Ajax for eight years. Achieving championships, the third star, experience.”

Vertonghen was also questioned on Matthijs de Ligt, and he’s clearly a big fan: “Unbelievable. Hopefully he can extend the run, but what he is now showing is very impressive.”