Tottenham Hotspur face PSV Eindhoven in the Champions League on Wednesday evening in what is probably a must-win match for Mauricio Pochettino’s side.

A tough start to the group stage means the club are likely going to have to take all six points from the Eredivisie side over the two matches.

Spurs travelling to the Netherlands is of course big news in the Dutch media and De Telegraaf have managed to get an interview with Toby Alderweireld.

The Belgian defender made his name with Ajax before moving on to Atletico Madrid, Southampton, and then Tottenham.

As happens nearly every time Alderweireld speaks to the Dutch media, he was asked whether he’s still planning to return to Ajax: “Never say never. At this moment in my career I don’t think about that yet. I think I can go on for years at this level. If I ever did, it is not to take it easy.

“I do not want to be 36 years old and can hardly walk. When I return, I certainly want to leave something. And not only in the dressing room. Of course it is close to home in 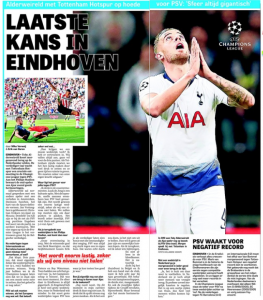 Belgium and I have a bond with the club, because I played football at Ajax for eight years. Achieving championships, the third star, experience.”

The 29 year old explained he has “beautiful memories” at Ajax. He didn’t say so, but surely those memories and the connection can only make Alderweireld even more determined to beat their rivals PSV this week.

With a transfer possible this summer and some of Europe’s biggest clubs repeatedly linked, it would surely be three or four years down the road when Ajax would become a realistic option.