David Luiz’s contract at Chelsea runs out at the end of the season, a deal which he signed when returning to Stamford Bridge from Paris Saint-Germain in 2016.

The Sunday Express reported, as relayed by Sport, that the Blues defender has emerged as a transfer target for Barcelona in January.

Mundo Deportivo also mentioned the Brazilian’s name as one of the targets as Ernesto Valverde and the La Liga winners look for an experienced defender in the mid-season transfer window.

Several outlets in England including The Mirror have cited Mundo’s report and carried stories.

However, Wednesday’s edition of the Catalan newspaper points out the centre-back has been linked with a move to the Camp Nou for several years, ever since he was at Benfica.

They go on to mention that Luiz to Barcelona will not become news because he is ‘not an option’ for the Spanish champions in January. 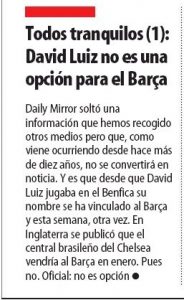 The former PSG man now joins Medhi Benatia on the list of players the Camp Nou outfit are not looking to sign.