Premier League side Crystal Palace are once again linked to the Brazilian striker Gabriel Barbosa. This time, by the Italian media.

Tuttosport has a big article about Inter Milan’s transfer situation, and it’s claimed that one of the first issues the club need to take care of is the 22-year-old.

Gabigol is currently loaned to Santos, in a deal which expires next month.

As Inter Milan don’t have the intention to keep him for the rest of the season, they are now open to negotiate his move to a European club.

Tuttosport claims that Inter will be demanding at least €20m for the player. They don’t want to lose much as they paid over €30m to sign him in 2016.

Crystal Palace are the only European side mentioned 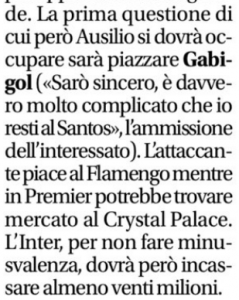 Santos want to extend the loan, and other clubs such as Cruzeiro and Flamengo are also said to be interested.

But Gabigol himself has admitted that it’s very unlikely that he’ll stay in Brazil for the next year.

Watford star’s agent has ‘offered’ him around – Profile being ‘followed’...