Home Europe “Tomorrow it will be solved” – Reading’s José Gomes on his future...
SHARE

The former Rio Ave manager mostly spoke about his old club, explaining what he watched saw of them this season and all the problems which led him to leave.

But his time with the Royals was a subject too. José Gomes has claimed he’s fulfilled a dream by taking charge of an English side, and when asked if his future lies with the club, he claims it’s pretty possible.

“When I arrived, I signed for a year and a half, but sometimes that’s worth it,” José Gomes told Record. “I’m working on it, even because I never hid it that was a dream to have gone to England and I’m happy.”

Asked if it’s possible that Reading will soon build a squad which can allow him to dream about bigger aspirations, Gomes claims the club are taking it step by step.

“At this moment we are still inside an embargo, we can’t register anyone, but tomorrow it will be solved. The owner wants to build this squad that allows us to feed the dream of promotion. And I think it’s possible.” 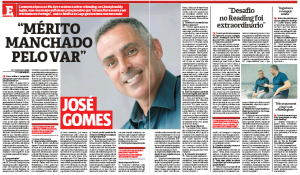 The manager was also asked when was the time when he felt he had conquered the hearts of Reading’s fans.

“When we started to win games, obviously, especially at home, where we stopped having an average of nine thousand fans, in the first games, to more than twenty thousand in the final part.”

And of course, Gomes talked a little about Portugal Day, when he was honoured by fans at the end of the season.

“It was absolutely amazing and exciting. This game with Birmingham I will not forget. Honestly, when there was the initiative, I thought it wasn’t going to have a big impact, but the truth is that all over the stadium there were colours of Portugal with scarves and flags. It wasn’t like a game of our national team, but similar. There were even supporters with their faces painted.”