As Sevilla chase the signing of the Eibar midfielder Joan Jordán, there’s a big concern that the player could be moving to the Premier League instead.

Newspaper Diário de Sevilla brings a story today saying the La Liga club would have a big challenge to keep the player away from a move to London.

The outlet recalls the interest from West Ham United, who have recently been linked to him, and adds claims from the English press which say that Arsenal would be keen as well.

Those claims actually started in Spain.

Diário de Sevilla makes it clear that Arsenal’s offer would be more tempting, not only for the money, but also for being a ‘big’ European side. 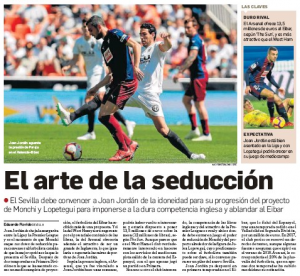 However, they don’t really buy The Sun’s story 100%, claiming it looks like West Ham are the real interested side for now.

Sevilla’s greatest weapon would have to be the club director Monchi, whose ‘seducing’ power would have to convince the player to continue in La Liga.

But with the Premier League money speaking louder, perhaps Eibar would see a big advantage sending the player to either Arsenal or West Ham.

Manchester United give transfer guru ‘a mandate’ to get midfielder signing...