That article didn’t sound very confident about the information, as it looked more like assuming that the arrival of a Portuguese boss would be an extra factor for the move.

Now it turns out we’ve found three other stories about this transfer, with each outlet claiming to have learned it from their own sources.

Starting with Record, they bring a front page saying ‘Special Bruno’, claiming that José Mourinho is indeed interested in taking the midfielder to London. 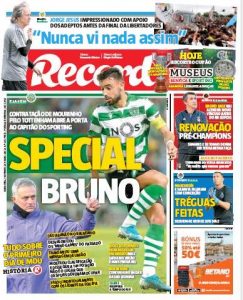 They say Mourinho is a big admirer of the player, and take all of his old comments about the Sporting captain, from a time when he called Bruno a ‘very complete’ player.

Correio da Manhã heard from a source that ‘Tottenham were the only club who presented a concrete bid for Bruno Fernandes in the summer market’. They’ve also learned the player only wants to move next summer, since he doesn’t like the idea of joining a new project in the middle of the season.

O Jogo says Mourinho’s arrival at Spurs should ‘hurry’ a new round of negotiations for Bruno Fernandes, and the help of Jorge Mendes, who had already been involved in the talks last summer, could help things develop.

What Record, O Jogo and Correio da Manhã all have in common is that they believe Sporting are only letting Bruno Fernandes go for €70m.