José Mourinho’s arrival at Tottenham Hotspur obviously got big coverage from the Portuguese press in the past 24 hours, and local newspapers are full of stories about it today.

Record brings the most interesting article, as they’ve learned from their own sources about the manager’s first contacts with the first team.

They say Mourinho got to the dressing room and had a chat with the squad which ‘not only surprised, but impressed’ the players.

It’s said that in a joke, he’s been ‘confronted’ with a question about his quotes saying he would never manage Tottenham. Mourinho claimed that was just his public image, made of mind games, and now he’s one of them, being ‘part of the family’. 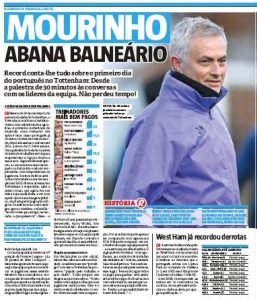 According to Record, Mourinho’s speech included words like: “I’ll be your father, your friend, your girlfriend, whatever you want.”

Record says Mourinho told the players they are a lot better than what the league table currently shows. He also had private conversations with Hugo Lloris, Harry Kane, Toby Alderweireld, Harry Winks, Dele Alli, Eric Dier and Christian Eriksen, who he’s trying to convince to stay despite the contract situation.

The Portuguese newspaper are pushing this as their own information and it certainly feels like they’ve got it from somewhere, rather than plucking the claims from thin air.