Having worked with Noussair Mazraoui at Ajax Amsterdam, Erik ten Hag will want a good right back at Manchester United.

He currently has either Diogo Dalot or Aaron Wan-Bissaka to choose from, while Axel Tuanzebe can also play there once he returns from his loan at Napoli.

Whether he chooses either of them as his starter remains to be seen, but Tuttosport in Italy believe the Dutchman has someone else in mind for his Manchester United team going forward.

That name is Denzel Dumfries, who currently plays for Inter, but who could be sold to the highest bidder after just one year of playing in Italy, where he replaced Achraf Hakimi.

The Italian newspaper, explain the Dutchman, who was signed for €15m is ‘today worth at least €20m more’, and is ‘the most requested player in recent weeks’. 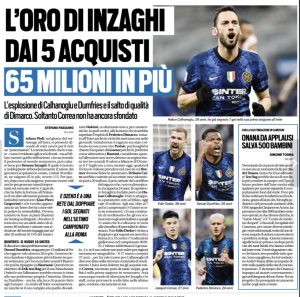 Bayern Munich looked at him before going after Mazraoui, who was reportedly ‘Erik ten Hag’s goal for his Manchester United’.

However, the new Red Devils’ manager would now ‘put the Inter player at the top of his preferences’.

We’ll have to see about that, but if Ten Hag gets the right-back he desires for just €35m (Dumfries is still only 26), then maybe Manchester United will be happy to present him with a nice gift on arrival.