It’s claimed that despite the little playing time he’s had with the Lions this season, the Lisbon side were still convinced by him and now have his permanence as an objective for the summer window.

Virgínia spent most of the season on the bench, and still impressed with his ‘professionalism’, having worked hard the whole time, and that made Sporting very ‘satisfied’ with the situation.

The Lions should now start working to keep him, and even though there’s a buying clause worth €3m in his contract, they actually want to extend the loan deal from Everton, this time in a cheaper agreement than the current one. 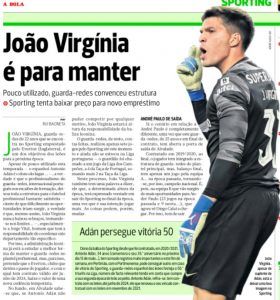 However, Sporting and Everton aren’t the only ones who’ll have a say in this negotiation. The Lions also need the approval from the goalkeeper himself. Due to his little playing time, with only seven appearances made his season, there was a point in the season where he expressed his desire to leave the Lisbon side this summer. So now the club must convince him of staying for, at least, another year.

The Portuguese side still have Antonio Adan the number one option for the goalkeeper position, but feel like Virgínia is ready in case they need a replacement at any point in the season.