Home Europe Leicester City need to be rapid or miss out on signing –...
SHARE

It’s been around a month since Leicester City started being linked to Mainz defender Jeremiah St. Juste, with the Foxes repeatedly being named as one of the main contenders to land the 25-year-old.

It now turns out that Brendan Rodgers’ side could be about to miss out on this signing, because according to reports from the Portuguese media today, Sporting are close to buying the player.

Newspaper Record features a front page claiming that the contacts between the Lions and Mainz ‘intensified’ in recent hours, and the agreement is now imminent.

Sporting are said to be close to signing St. Juste in a €10m deal, beating competition from several European sides who’d been interested in the Dutchman. 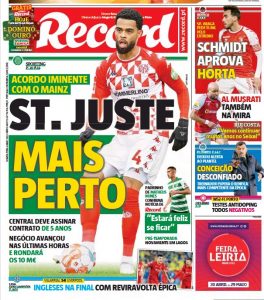 Record doesn’t name the clubs who’d been competing with the Lions for the purchase, but as other outlets write about the defender today, they both mention Leicester City.

Portuguese newspaper O Jogo, who has a little story saying St. Juste is closer to Sporting, points out the Foxes as one of the competitors, claiming the Lisbon club are moving during the ‘lack of definition’ from the other interested sides.

Meanwhile, SportBild also names Leicester City as one of the English clubs ‘playing poker’ in this fight for the defender. The German outlet, however, isn’t that certain about his move to Portugal.

So in case the Foxes still want the signing done, it sounds like they have very little time to move until Sporting complete the deal.