Earlier on Monday, we covered a story claiming that Pep Guardiola, desperate to strengthen his backline at Manchester City, wasn’t ‘giving up’ on Milan Škriniar.

The centre-back, currently playing for Inter, caught the Spaniard’s eye a while back, and despite previous reports of a bid being turned down, the former Barcelona manager hasn’t given up on his pursuit.

If that wasn’t a problem enough for the Serie A club, Škriniar isn’t the only player in Antonio Conte’s squad that is on Guardiola’s agenda.

We’ve covered it in the past, but there appears to be a strong interest from Manchester City in Lautaro Martínez, as the Premier League club think about the future and what happens when Sergio Agüero eventually leaves the Etihad.

Gabriel Jesus would be the prime candidate for the role, but he would need competition and someone to rotate with, which is where the Inter starlet would come in. 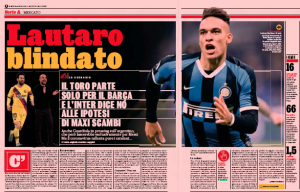 Gazzetta dello Sport on Monday explain Manchester City are one of the club’s to have ‘moved with the Argentine’s entourage, sending more than one signal’.

However, Martínez isn’t currently interested in a move to the Etihad.

The Italian newspaper explain the striker, in the short-term, is fully focused on winning something with Inter, as he knows the club’s ‘plan’, believing their ‘ambition can be translated into trophies’.

That’s why ‘there is no Manchester City in his head’, and the only side that could lure him away from Milan is Barcelona, where a certain Lionel Messi plays, but the €112m Inter want is the big stumbling block for the Catalans.