Towards the end of 2019, something that was unthinkable even six months prior happened: Tottenham parted ways with Mauricio Pochettino.

The Argentinian manager had been at the club for five years, had turned them into Champions League finalists and everyone seemed happy with how things were going in North London.

However, a poor run of form and some disillusionment from Pochettino led to a rather amicable parting of ways, which saw José Mourinho eventually take over at Tottenham Hotspur Stadium.

The Portuguese’s start has been one filled with ups and downs, and a severe injury to top scorer Harry Kane was always going to make things difficult.

That being said, it appears the Special One wasn’t first on Daniel Levy’s list, as Il Messaggero report on Monday the Spurs chairman had eyes for another manager.

That man is Lazio’s Simone Inzaghi, whose good work at Lazio somewhat mirrored what Pochettino managed at Tottenham, turning them into a strong force in Serie A, as they currently sit second, one point behind Juventus. 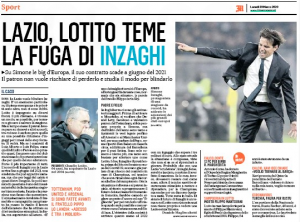 It’s stated Levy was ‘precisely thinking’ about the Italian, which set some alarm bells ringing in Rome, with Claudio Lotito now trying to tie down his manager.

Inzaghi himself told his bosses to wait until the end of the season, but their plan is to keep him around until at least 2022, with a salary of around €3m/year.

Il Messaggero reckon that had the 43-year-old won the title with Lazio, he would have left, believing he’d achieved all he could, but with the future of the current season in doubt, he might stick around for longer, especially if they get given the Champions League qualification they deserve.

Either way, Tottenham now have Mourinho, and it seems unlikely they will part ways with him just yet, but perhaps for the post Special One era? Inzaghi certainly ticks all the boxes.